Build some kind of interactive entertainment with a ‘Makey Makey’ board, for the digifete.
Makey Makey uses simple circuitry and keyboard inputs to create entertaining
games out of everyday objects which conduct an electrical signal. makeymakey

Within our first brainstorming session we came up 2 awesome ideas Real life Operation or, a real life Mario game based on the orginal 80’s veriosn. Both ideas would require physical builds a little HTML magic. After much heated debate and beer drinking we went with ‘Mario'. 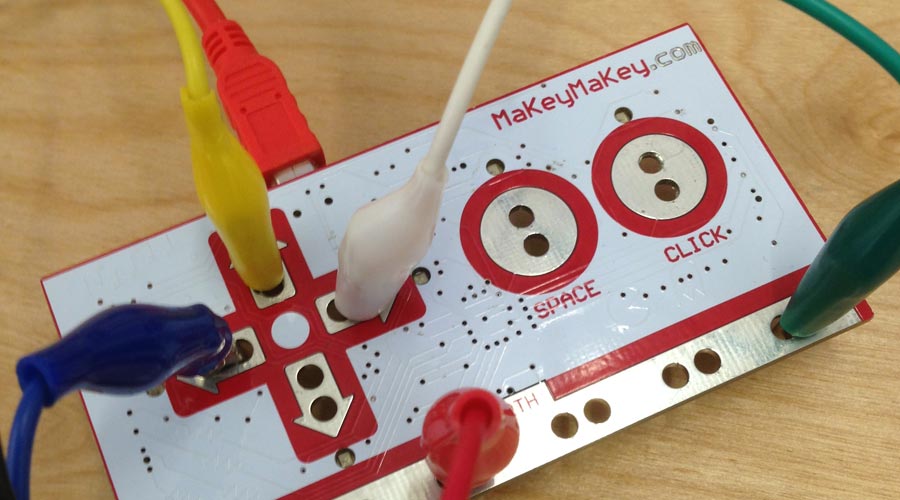 The Mario game would require 3 controls. Left, Right and Jump, and like most ‘Makey Makey’ games the user is required to hold the earth cable to complete the circuit.

We discovered by trial and error that people didn’t like holding a cable with a live current. So Nate(thats me), created a prototype trigger to test an alternative functionality. Introducing the holypunch-2p. A simple trigger that allowed us to gage peoples reaction when playing the game – where reaction time is key. See pictures of holypunch-2p on my tumblr. 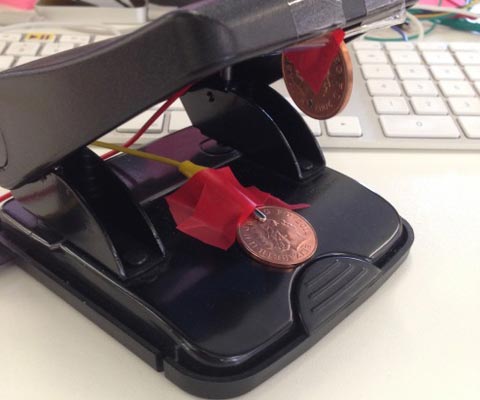 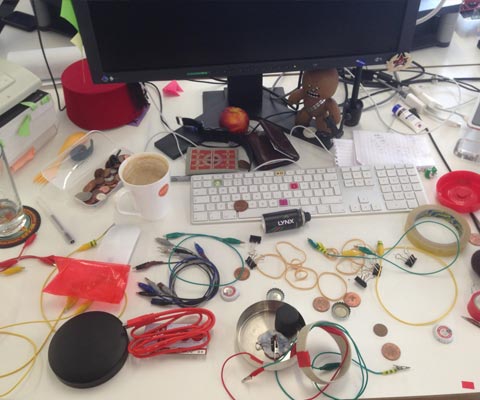 With most games the analog control stick responses quickly to users input. However, the holypunch-2p control had a small delay, it was interesting to learn how users adapted to the feedback delay… We used a game called Canabalt Run for the test. It went down a storm, users got all competitive, challenging each other to rematches –  Holypunch-2p was the proof that a phygital game would be fun. Now we just needed to scale up the idea and what better way, than the health and safety ‘excitement’ of bouncing on a trampoline in the office, under the influence of beer?

First hurdle to jump (pun intended) was what to call it? Inspiration hit with the aid of beer and watching Jonny Goodall gracefully bouncing like a young rabbit on our trampoline… The next morning, Andy put together the brand and designed a sprite sheet and ‘Jumping Jonny’ started to come to life. 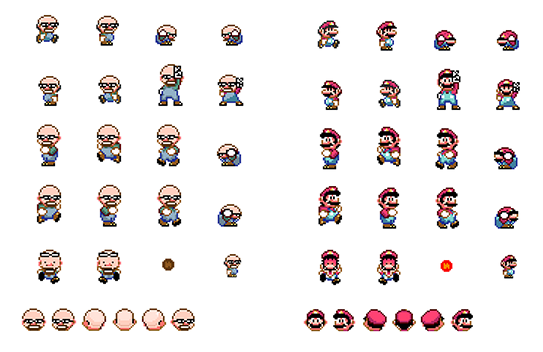 Andy continued slaving away, reworking the 8bit Mario into the new 8bit Jumping Jonny, including company principles who would try and kill the Jumping Jonny and a background theme based on our office space. Mapping how to build the game, with a trampoline was easy… building it was another matter.

Problem one. How do you attach the earth to a trampoline without is coming off as people bounce up and down? 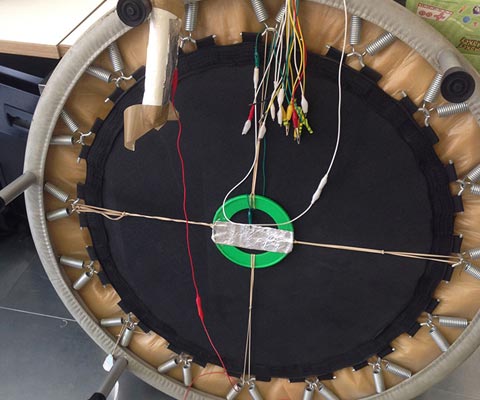 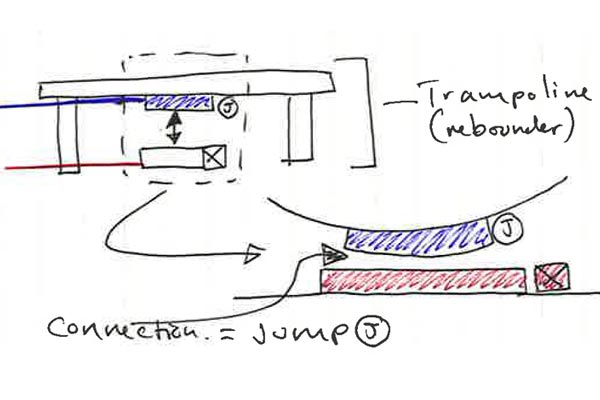 After some trial and error, Nate attached the cables to trampoline by suspending them with rubber bands, held in place with one a dog chew toy… Obvious really, it allowed for free movement of the cable when connected to the element on the floor.

Next the triggers for moving Jumping Jonny Left and Right. This was more tricky, we tested 2 of the prototype hole punches. However, the odd electrical shock would send our gaming guinea pigs into a fit. The answer came to Nate late at night as he lay in his bed dreaming of shooting a Tech Lead with a napalm flame thrower. 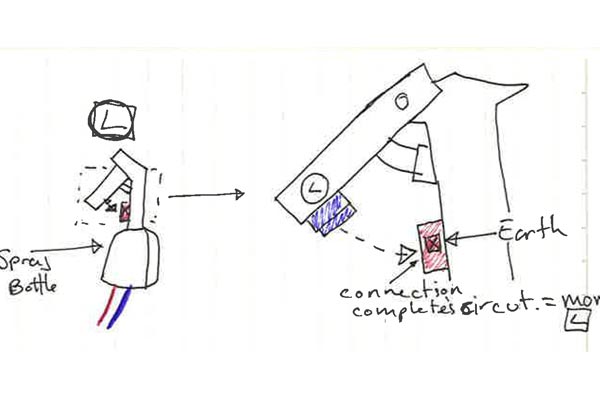 Spray bottles use a simple trigger, which with some shed style tinkering with; cables, crocodile clips, foil and copper coins (see above) a great controller could be made. 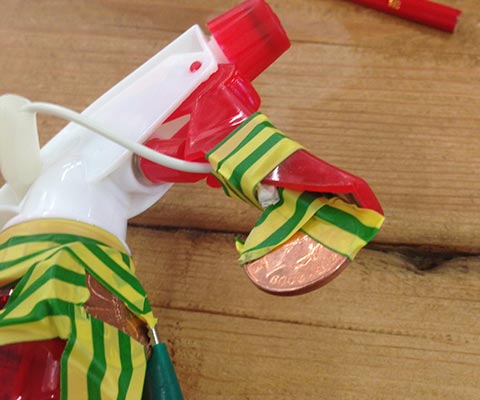 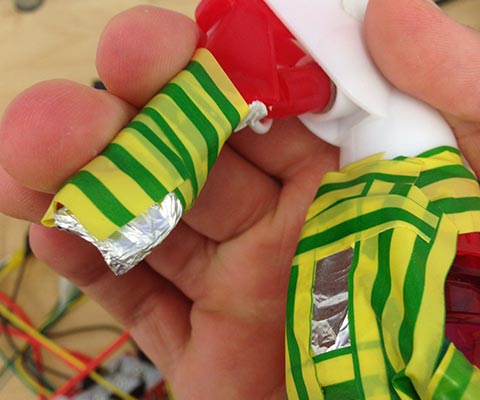 With the game controls complete… it was time to test it all. Test threw up some problems. The copper coin wasn’t robust enough for more vigorous users, slipping off the contact point. A simple change for wrapped foil nailed it. The trampoline proved to be a better conductor than expected, the current flowing through trampoline caused Jumping Jonny to jump before the used had… Some of Andys rubber gloves (we still don’t know why he has rubber gloves in his desk) for the backing for the connectors and Jumping Jonny started to bounce on command. 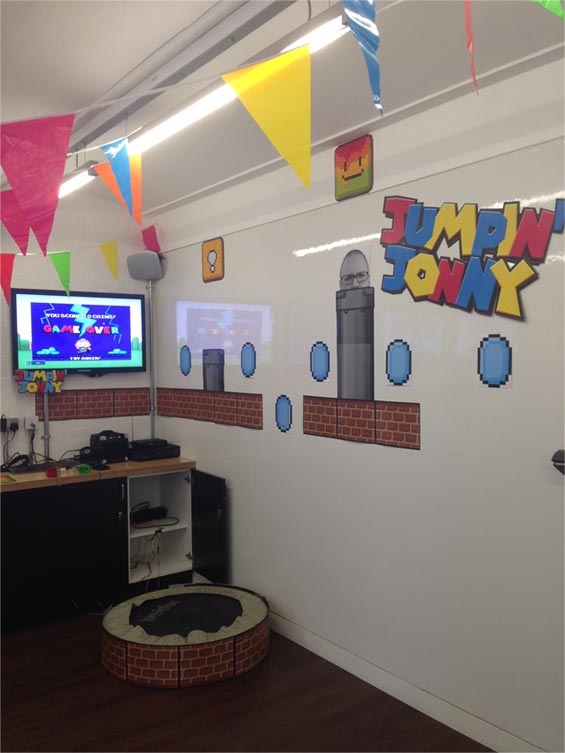 Results from the day.